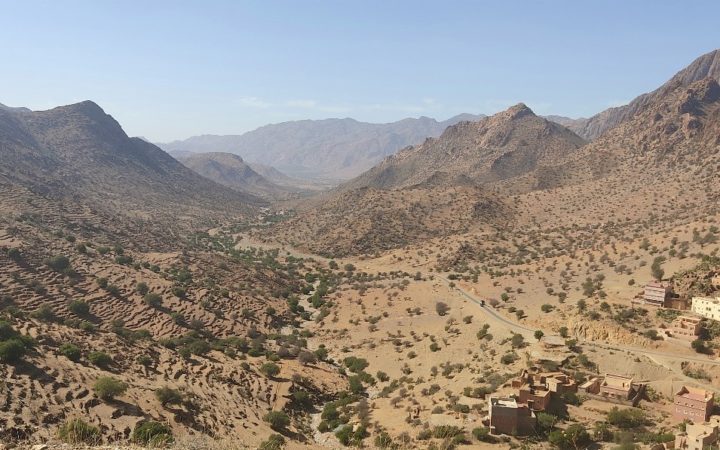 In the framework of the Edu-BioMed project, a field trip has been realized in the Biosphere Reserve of the Arganeraie in Morocco (BRA), guided by Mr. Said Boujrouf, Professor of Geography at the University Cadi Ayyad of Marrakesh and his three students, Hala Idrassen, Salma El Ghiouan and Hajar El Yazidi. The expedition took place between October 29th and November 2nd, 2020 and aimed at different objectives such as working on Biosphere Reserves (BRs) regional integration, exchanging with local BR actors, analyzing the areas for one of the student’s master thesis as well as getting some elements for the Edu-BioMed MOOC, currently in preparation.

The participants agreed to share with us the activities they underwent in the heart of BRs diversity. They hereby highlight the numerous aspects involved in a Biosphere Reserve, might they be environmental, social, economic and educational. Enjoy the journey!

The participants embarked in this journey and discovered the ecological diversity that abounds in this area, as well as the recent territorial evolutions and transformations. Prof. Boujrouf shared some observations related to the geographical, cultural and heritage nature of the areas on the way to the BRA.

During the participants’ stop in Agadir, Mr. Afker Abdelaziz, representative of the regional directorate of water and forests (DREF) at the level of the BRA, Souss-Massa region, intervened. Discussions focused on the regional integration of the BRA, on the revision of the BRA zoning, its challenges and its repercussions on the territory of Arganiers.

The areas of argan trees in the plain were explored by the participants and some interventions were made by the RARBA (the network of associations of the argan grove biosphere reserve), whose activities in the BR were presented. Mr. Ahjam, the provincial coordinator of the Network welcomed the participants in Tiznit. The state of the argan forest in this region, the challenges raised and the obstacles the forest faces were discussed. The participants also had the opportunity to participate in a training on “Socio-economic rights and sustainable development objectives for 2015-2030”, intended for local actors such as elected officials of municipalities and members of cooperatives of Tiznit and its region.

On their way to Tafraoute, the participants explored the Anti-Atlas, the existing symbiosis between the cactus and the argan tree as well as the cultivation terraces. They visited the surroundings of Sidi Ouarzeg, ArbaâaMesti, Khmiss de Tioughza and Khms Lakhssas. This allowed them to clearly observe the emergence of these territories together with the profound spatial and habitation changes due to migration.

This trip was also the occasion to meet on the one hand, with locals about the cultural importance of the argan tree and the changes that have occurred, and on the other hand, with women from the local BR cooperatives and discuss their career paths and experiences.

On the way back to Agadir, the participants had the chance to observe the argan trees in the high mountains and those in the plain, and to make explanatory videos in the heart of these landscapes. Traditional tools used in pastoral activities were presented and compared to the modern ones.

The participants had also the occasion to meet Mr. Aboutayeb Hassan, the founder of the Ecolodge Atlas Kasbah and to benefit from his experience in the development of territorial tourism projects and tourism valuation tools. This allowed them to understand the vision of tourism professionals, and to tackle the question of appropriation of the concept of RBA and the issue of collective intelligence. Overall, this discussion highlighted the existence and importance of a symbiosis between economy and sustainability.