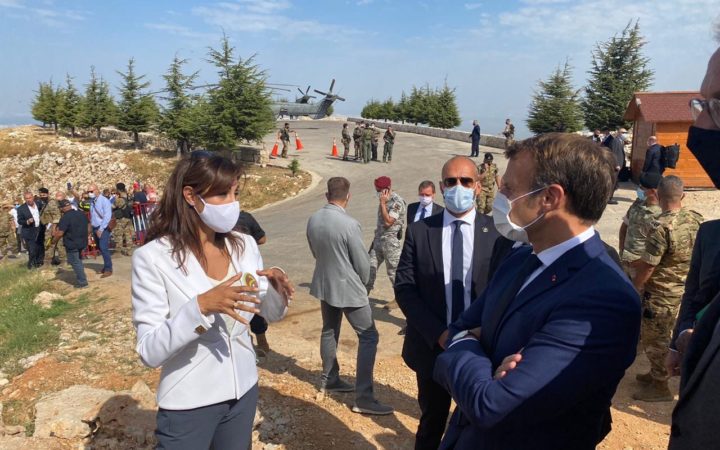 On September 1st, 2020 Magda Bou Dagher Kharrat, Professor at Faculty of Science, Saint Joseph’s University, co-founder and President of JOUZOUR LOUBNAN NGO, has accompanied the French President, Mr. Emmanuel Macron, in Jaj Nature Reserve to plant a cedar tree on the occasion of Lebanon centenary. She agreed to share her thoughts with the EduBioMed partnership on this symbol, on the Lebanese and worldwide situation and its impact on the ecology and the youth.

In this very delicate moment for political, social and sanitary reasons what does it mean to plant a cedar? What is the symbol for Lebanese people?

The act of planting a cedar, the emblem of our country at the dawn of its 2nd centenary, has a special symbolism: our attachment to the land of our homeland. President Macron’s initiative underscores France’s attachment to Lebanon. Without trees, the soil – a memory of history and all the life that has been perpetuated on it – erodes and goes … Without its people, Lebanon is dismantled and its identity vanished. In this difficult context, many Lebanese emigrate. By planting a cedar before leaving, we promise our country to return, a sort of living pledge that will one day bring us back to Lebanon.

In which way the environmental issues are part of the Country’s reconstruction process?

In times of crisis, all attention is paid to the immediate survival of humans: protecting themselves from the virus, rebuilding their homes, securing their daily bread. We tend to divert our attention from environmental issues that are not urgent, but that are actually very important. We know that environmental crises are silent. Species are becoming scarce and disappearing, the atmosphere is poisoned and will cause respiratory diseases and cancer later, so is the pollution of water and soil! The cases are diluted and dispersed, our quality of life is gradually deteriorating and when we realize it, it is often too late. This is why we must remain vigilant. Short-term emergency work must be done in parallel with continuous, long and long-term work for environmental protection. As we rebuild our city, let’s keep environmental issues in mind.

How do you think that the youth and the universities can help in this process?

The Lebanese youth is Lebanon’s only hope. By remaining mobilized, by taking to heart the mission of giving its voice to silent nature, they can change the situation. All these young people mobilized after the explosion are dealing with enormous quantities of building reconstruction, broken windows, materials to be recycled. We are already seeing the emergence of innovative initiatives transforming this waste into resources, turning disaster into opportunity. Our young people have the knowledge and the know-how, they bear part of the responsibility for the sustainable reconstruction of Beirut. The reconstruction must be done according to more ecological standards, less polluting and less invasive, in respect of nature.

Let’s not forget that nature is also our ultimate refuge. Many Lebanese who were not physically affected are suffering morally. These after-effects take a long time to heal and can reappear at the slightest scratch. Being in contact with nature, planting, restoring, relieving and giving hope for a better tomorrow. Nature absorbs our sorrows and softens our existence. It puts us in our place in the circle of life. We put it into perspective …

Jouzour Loubnan is a Lebanese NGO that I co-founded in 2008 with friends with whom I share the idea that we have a duty to restore forest ecosystems destroyed by humans. Jouzour Loubnan’s primary mission is to restore the forest cover in Lebanon, encourage local communities to protect, manage, promote and benefit from these projects and to raise awareness among future generations. Jouzour Loubnan’s scientific partnership with the USJ Faculty of Science is exemplary. We restore ecosystems based on scientific data acquired by top scientists. Understanding the functioning of the ecosystem and its peculiarities gives us a better chance of success in our forest restoration projects.

What is the initiative “adopt a cedar”?

Adopt a cedar is an initiative that Jouzour Loubnan launched 4 years ago now. It consists in giving the possibility to everyone, unable to come with us on the ground to plant a cedar, to adopt one that we will plant for them and take care of it. This cedar, listed by a single GPS point and which can bear a name badge on request, can be visited. The financial contribution for this adoption is one-off, it is done online through a platform dedicated for this purpose. It is accessible from all over the world. I was very moved last year when about fifteen young Lebanese-Brazilians came to Lebanon for the first time in their life, and the first stage of their visit was to go up to see the small cedars that the Lebanese diaspora of their country adopted in their name! Adopting a cedar tree and offering the adoption certificate is a meaningful gift, and it comes for many occasions.

Which is the importance of the EduBioMed project in the Lebanese Higher Education system?

The EduBioMed project formalizes the “Biosphere Reserves – Academic Environment” partnership. It gives us a concrete opportunity to forge this essential link which will benefit both protagonists! It’s a kind of dating platform where you can only fall in love with each other. For the students and their supervisors, it is an immersion in the heart of the matter, giving the opportunity to carry out concrete conservation actions. For the biosphere reserve, it means taking advantage of qualified and competent human resources that will allow them to highlight their wealth and their particularities and keep the fragile balance “Man – Nature”. In the context of the current crisis, EduBioMed constitutes a cornerstone in the edifice of environmental education and the training of the environmental professionals of tomorrow.

Do you think that we witness the beginning of a better communication between academics/practitioners and policy-makers?

The EduBioMed project has built bridges between academia and managers of biosphere reserves. These bridges are solid and the land that will be marked out as part of this visionary project will be used by several generations of young people who choose to train in this field. EduBioMed will leave an indelible positive mark on the environment.