How to protect plant species of conservation interest in cities? 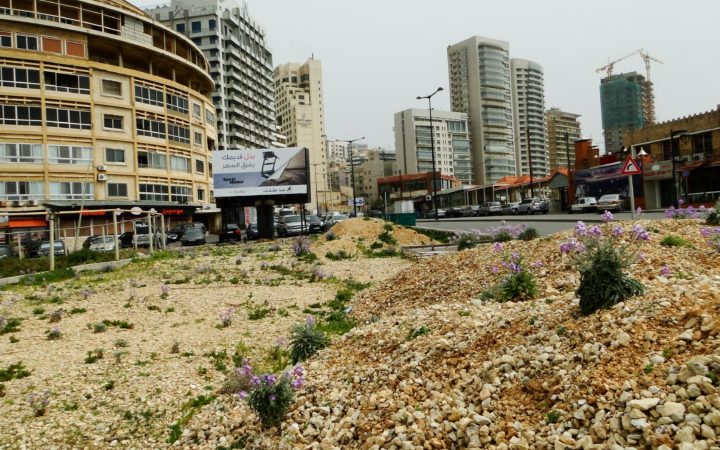 Green spaces inside cities form a new type of nature created from ‘scratch’ or irreversibly changed by people. This new nature in the city is novel because all its components are ‘artificially’ co-occurring; the soil, the water, the nutrients, and plant species which never existed together grow side by side in the city. Yet, this urban nature may serve as a valuable habitat for rare or endangered plant species, if one can design urban green spaces that are suitable for their growth and reproduction. This specific question was addressed by Moustapha Itani, an MSc. student enrolled in the ecosystem management program in the department of landscape design and ecosystem management at the American University of Beirut.

The plant species targeted by the study is rare Lebanese endemic Stock (Mantour – Arabic, Matthiola crassifolia), which has persisted in Beirut city despite the rapid urban expansion. Considering that there are no vegetation description methods adapted to the peculiarities of vegetation in cities lacking standard habitat classification systems such as Beirut, the study applied two main methods normally used when studying natural areas; floristics (taxonomic identification and species abundance) and physiognomy (plant form, life form, layers, and sizes).

The study was conducted within a 6 km long and 2 km wide cape in the city of Beirut. Field explorations of green spaces in the study area showed that the rare Lebanese endemic Stock (Mantour) was found growing along the shore in remnant spiny Mediterranean heaths, screes, sea cliffs, and rocky offshore islands, sandstone formation, limestone formations, and on (stabilized) coastal sand dunes. Inside the city, the plant grew near open sewers, in abandoned dump sites, through cracks in concrete walls and asphalt, on heaps of gravel, in street medians, and even out of the trunks of date and fan palms. The presence of the Lebanese endemic Stock in all these different habitats indicated that this species was able to be amongst the first to appear and grow in disturbed areas.

This plant behavior complicated the floristic data analysis which did not shed light on any preferred type of green spaces and therefore did not clearly inform on the species assemblages that offer suitable habitats for the rare Lebanese endemic Stock. In contrast, the data generated by life forms and abundance showed a pattern of relations with the target species, but it did not reveal the identity of the favorable species. More detailed information was obtained when data from both methods were used in a stepwise approach, first mathematically classifying plants according to form, then sorting according to taxonomic identity.

The outcome of this exercise produced detailed information that pinpointed to urban habitats favorable to the target species. For example, the plant grew well in green spaces dominated by palms, low-lying succulents, or shrubs with scale-like leaves but it did not persist in green spaces dominated by turf grass, canopy trees, or vegetation that produces a significant litter. In addition to pointing to specific favorable plant associations, the study showed that an exotic and potentially invasive plant species (Carpobrotus edulis) was favorable to the growth of the rare endemic Lebanese stock.

The outcome of the study was a plant selection palette that is not restrictive and does not enforce a native only policy for creating habitats favorable to the rare Lebanese Stock. More importantly, the stepwise method developed by the study can serve as a tool that promote collaboration between plant ecologists, landscape architects, and landscape managers interested in reconciling conservation, socio-behavioral and aesthetic objectives.