The Biosphere Reserve of the Arganeraie: workfield for doctoral researches 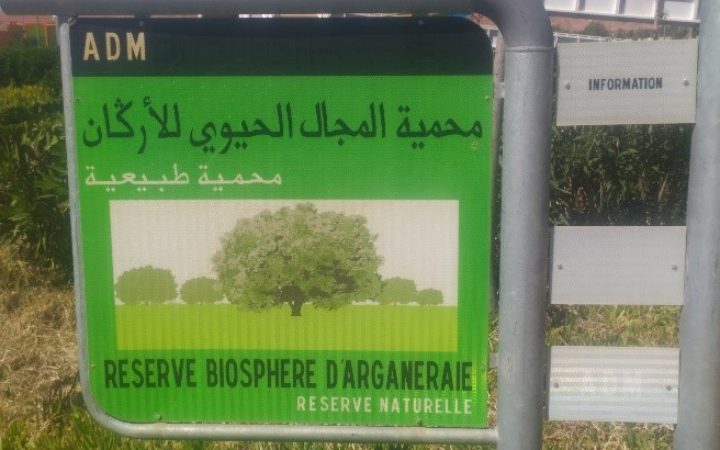 Following a first field visit held on the end of October and beginning of November 2020, Hala Idrassen and Salma El Ghiouan, Doctoral Students at the University Cadi Ayyad of Marrakech have conducted a five weeks field work in the territory of the Biosphere Reserve of the Arganeraie to develop their Doctoral thesis.

Starting from the end of January 2021 and up to the beginning of March 2021 and following the Deming methode (Plan-Do-Check-Act) Hala Idrassen has conducted filed visits and meetings with province and prefectures representatives in the areas of Agadir-Ida-Ou-Tanane, Inezgane-Ait Melloul, Chtouka-Ait Baha et Taroudannt.

– Study the levels of integration of each actor intervening at the RBA level and the cross-functionalities between the actions of the actors (Verticals / Horizontals);

– Analyze the behavior and practices of the local population, vis-à-vis the RBA, as well as a key actor of the RBA;

– Question the decision-making process and interaction between stakeholders at the level of the RBA;

– Acquire documentation from the actors and take photos and videos to feed the research.

Starting from the end of January 2021 and up to the beginning of March 2021 she conducted field work and visits in the provinces of Agadir-Ida-Ou-Tanane, Inezgane-Ait Melloul, Chtouka-Ait Baha, Taroudannt.

Through the use of a set of tools such as questionnaires with the local population and cooperatives, and interview with actors present at the RBA level, she collected data and information necessary to study the problem and verify the hypotheses previously developed, either to confirm them or to invalidate them.

The field presents, on the one hand, an opportunity to concretely perceive the actors of the RBA and their interactions vis-à-vis with the reserve. On the other hand, it allows to see the relationship between the different components of the emerging territories of the RBA.

– Understand the emerging territories of the RBA in its dynamics, by studying the tasks and roles of the actors involved in the reserve (representatives of local authorities, professional organizations, administrations and representatives of the State, cooperatives, etc. .);

– Analyze the nature and the relationship between the daily practices of the local population vis-à-vis RBA;

–  Study the socio-economic situation of the local population in the territories of the RBA;

– Study the way in which decentralization and deconcentration policies contribute to the emergence of new territories within the RBA;

– Obtain the necessary documentation and data from the actors to support her thesis while taking photos and videos of the most important moments.

The two researches are conducted under the supervision of Prof. Said Boujrouf and the work field has been supported by the Edu-BioMed project.